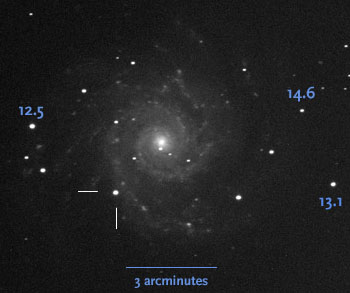 Short lines mark the location of Supernova 2013ej not far from the core of spiral galaxy Messier 74 in Pisces. The magnitudes of three foreground stars are indicated for comparison. North is up. British observer Pete Lawrence recorded this 5-minute-long exposure on the morning of July 31st using a 17-inch robotic telescope in Spain.


Pete Lawrence
Chalk up another one for the astronomers of the Lick Observatory Supernova Search. Using a robotic telescope atop Mount Hamilton in California, the LOSS team announced that the system spotted a new 13.5-magnitude star about 2.7 arcminutes southeast of the galaxy's core on the morning of July 25th. By August 1st, Supernova 2013ej brightened to roughly magnitude 12.5, then stayed there. The image at right shows its appearance on the morning of July 31st.

Messier 74 is a relatively bright (10th magnitude) spiral galaxy some 30 million light-years away. Located in Pisces, it's well up in the eastern sky by midnight or 1 a.m. as of mid-August. 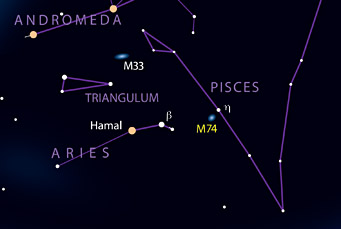 Messier 74, one of the dimmer Messier objects, is a face-on spiral galaxy 1.3° east-northeast of the 4th-magnitude star Eta (η) Piscium. In late July this area of sky rises above the eastern horizon shortly before midnight and is well up by 2 or 3 a.m. North is to the upper left; the scene is shown as it appears when in good view well up in the east. Stars are shown to 4th magnitude; the galaxy is 10th magnitude.

The supernova lies 92 arcseconds east and 135 arcseconds south of the galaxy's core. The coordinates are right ascension 1h 36m 48.16s, declination +15° 45′ 31.0″. For judging its brightness yourself, print out this ½°-wide comparison-star chart from the American Association of Variable Star Observers (AAVSO).

Spectra taken soon after the discovery show a blue continuum with distinct Balmer emission lines from hydrogen atoms that are typical of a young Type II supernova. This means the blast resulted when a single massive star collapsed inward onto its unstable core and exploded. 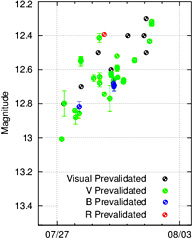 This light curve from the AAVSO shows how much Supernova 2013ej brightened in the week after its discovery. Click here for an up-to-date version of this chart.

It turned out that M74 had been targeted more than once by the Hubble Space Telescope, and images taken in November 2003 and June 2005 appear to show the progenitor: a 25th-magnitude star that was particularly bright at near-infrared wavelengths and likely an M-type red supergiant before it destroyed itself.

Rubab Khan (Ohio State University) also reported that the Spitzer Space Telescope showed a candidate star in the supernova's location that (in the infrared, at least) outshines the Sun by up to 30,000 times.

Located at Lick Observatory, the KAIT telescope is a 0.76-m dedicated reflector that scans the sky each clear night for exploding stars. It revisits each of roughly 20,000 galaxies every 2 to 12 days. KAIT's singleminded searches have been highly successful: since 1998, this telescope has discovered nearly 900 supernovae.

Thanks 4 this nice and interesting information on this supernova on live . Invite to read http://www.Yahushah.net/astronomia.html

Last month Alex Filipenko from UC Berkeley Lick Observatory gave a very interesting and entertaining talk about cosmic expansion and dark energy at the San Francisco Amateur Astronomers / Friends of Mount Tamalpais public star party. Much of the evidence for cosmic expansion and dark energy comes from observing supernovae in distant galaxies, and many of these supernovae have been discovered by the venerable 30-inch reflector at Lick Observatory. Lick is also an invaluable training ground for undergraduate and graduate students. Dr. Filipenko told us that because of the loss of state support the University of California will no longer be able to fund Lick Observatory! If you want the Lick Observatory Supernova Search to continue, please join the Friends of Lick Observatory, http://www.ucolick.org/public/friends/

That is astounding that they can identify the progenitor star 30 million light-years away from archived photos. Long ago and far away, in a galaxy in Pisces, some astronomers foresaw the birth of a king. Any extra neutrinos reported or gravitational signals from LIGO?

Neutrinos from SN1987a were detected. This supernova was also Type II and is in the Great Magellanic Cloud 170000ly away. A lot more distant than SN2013ej. Let's ask to neutrino experts. SN1987a'sprogenitor was also known as supergiant Sanduleak.
About LIGO I don't know.

Excuse me, this new SN is 30Mly afar. 180 times more away than LMC.
No more comments.