A large, complex sunspot group designated Active Region 1944 has rotated onto the Earth-facing side of the solar disk. 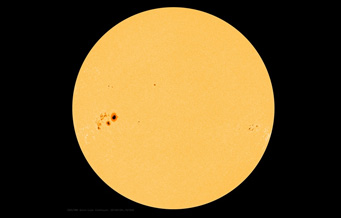 All of 2013, supposedly the peak in Cycle 24, left solar observers feeling cheated: few sunspots, even fewer auroras, and no real solar storms to speak of.

But 2014 has gotten off to a fast start. A strong (M9) solar flare erupted on New Year's Day, though its energetic punch wasn't directed toward Earth.

January 1st was also when one of the largest sunspot groups of this solar cycle rotated around the limb and into view. Designated AR (Active Region) 1944, this giant is roughly 100,000 miles across. Earlier today my wife (blessed with keen vision) glimpsed it by eye through a glass solar filter without much trouble; it was more of a struggle for me. 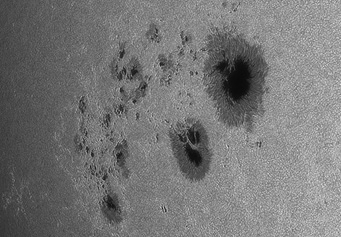 This isn't a single sunspot but rather a group of many clustered together. "It's impressively complex," notes Tom Fleming, a veteran solar observer. "I got a count of 26 yesterday but I could only rate the conditions as 'fair' . . . too much turbulence. The actual count is probably closer to 45." Fleming notes this was already a mature group when it rounded into view, so at its peak the count was likely higher.

This group should reach the center of the solar disk in about 3 days. Because it's located near the solar equator, space-weather watchers will be on the alert for flares, which might direct a blast of relativistic energy Earth's way.

You can safely view a magnified view of the solar disk by pointing one side of a binocular toward the Sun and projecting an image onto a white card.

In the meantime, it's an excellent grouping to view through a telescope equipped with a safe solar filter. If you don't have the right filter, set up binoculars on a tripod, uncover one side, and point toward Sun. Don't look through the binoculars, but instead project the Sun's image onto a white card placed behind the eyepiece.

Being in the Seattle this time of the year and having an open sky during the day and being able to see the largest sun spot in 10 years doesn't happen to often, But it did and having a stacked 90mm Coronado Solar Telescope and a 140mm Vixen refractor with a 2" Hershel wedge filter all mounted on a extended Explorer Scientific dual Twilight mount made my day.

WHOW, I sketch the Sun every day I can. I've seen several Flares, Coronal Mass Ejections, Space junk fly in front of the sun all in real time but this Sun Spot took my breath away.

I wish every had a chance to view this.