Brilliant Venus pairs closely with a very thin crescent Moon before dawn on on Wednesday, February 26th. The view will be great from the U.S., fantastic from Europe, and the Moon even occults Venus as seen from parts of Africa. 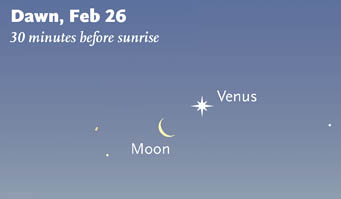 A waning crescent Moon passes near Venus in the eastern sky on the morning of February 26th. The separation here is plotted for the East Coast; they're a little farther apart on the West Coast but much closer together as seen from Europe and Africa.

The invisible clockwork of the solar system occasionally brings two prominent objects together in the sky, and the next such pairing occurs before dawn on Wednesday, February 26th.

That's when early risers get to see dazzling Venus, magnitude –4.8, perched to the upper right of a waning crescent Moon that's just 10% illuminated.

This is sure to catch the eye of anyone looking toward the predawn eastern horizon. The two appear about 3½° apart for those on the East Coast, but they'll have separated to about 5° by the time they've popped into view for those out West.

Telescopically, Venus also shows a crescent phase, though not nearly as thin as the Moon's. The similarity can be deceiving, though: while the Moon is roughly 224,000 miles (360,000 km) from Earth, Venus is some 200 times more distant. 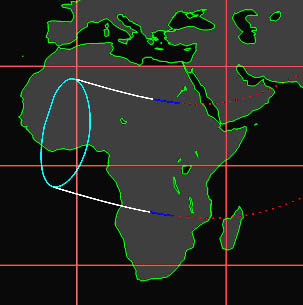 The Moon occults (covers) Venus on the morning of February 26th, as seen from a broad path across central Africa. Color coding: occultation occurs at moonrise (cyan), at night (white), in twilight (blue), and in daylight (red).

This would be a great opportunity to try a little early-morning astrophotography using cameras with lenses of 50 to 200 mm in focal length. Use a tripod to steady the view, and operate the camera remotely if possible (or use the self-timer function).

The pairing is far more breathtaking for those of you in Europe and Africa. From those locations, the separation drops to 1° or less. In fact, the Moon actually passes in front of Venus for a wide swath of central Africa. Click here for a timetable of disappearances and reappearances for various cities.

If you look at Venus through a small telescope at low power, or even steadily mounted binoculars, you will be able to see that the crescent of Venus is much thicker than the Moon's slender crescent. Here's a webpage that will give you a diagram of the locations of the Earth and Venus (plus Mercury and Mars) in our orbits around the Sun: https://www.fourmilab.ch/cgi-bin/Solar/action?sys=-Si If you think about the greater distance of Venus from Earth compared to the Moon's distance, and therefore the greater angle from the Sun to Venus to Earth compared to the angle between the Sun, Moon and Earth, their different shapes will make sense. If you keep watching Venus during the coming months, you can prove to yourself that Galileo was right and Venus must be orbiting the Sun, not Earth.

The moon and Venus together on Wednesday morning look to me like a baseball mitt (crescent moon) just about to catch a baseball (Venus). Great parallel to baseball spring training.
Sad that I won't 'catch' a photo of this, since clouds are forecast for Wednesday morning for NYC - I hope someone gets the photo!