From high-altitude clouds discovered on a super-Earth to massive, hurricane-force storms on a nearby brown dwarf, a bevy of results show that the age of “astrometeorology” is upon us.

Imagine turning on the radio and hearing a weather forecast. But rather than predicting some mild winter rain in your city, the forecast describes hurricane-force winds brewing on another world, one where a storm of behemoth proportions covers a quarter of the sky. 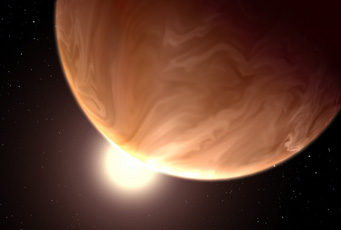 Hubble observations show that the super-Earth GJ 1214b must have high-altitude clouds. And these clouds are like nothing we've seen in the solar system, perhaps made of potassium chloride or zinc sulfide droplets.

That’s not a What If from the future. The radio broadcast may be imagined, but the forecast itself is real. At the winter meeting of the American Astronomical Society, one theme became clear as team after team announced results: astronomers have moved beyond merely counting alien worlds to studying their compositions and atmospheres.

Not that counting isn’t important — one of the Kepler mission’s defining goals was to find out how common Earth-like planets are (as it turns out, pretty darn common). But even before Kepler, astronomers were detecting transiting planets by the blip in their parent star’s light. Two of these planets, GJ 1214b (a super-Earth) and GJ 436b (a Neptune-size planet), closely orbit red dwarf stars only 42 and 33 light-years away, respectively.

“I call [GJ 1214b] everybody’s favorite super-Earth, in part because it’s so close,” says Laura Kreidberg (University of Chicago). Her team used the Hubble Space Telescope to capture the spectrum of starlight passing through the planet’s atmosphere as it transited across the face of its parent star not just once, but 15 times — 4 days of observation in all. “I feel like a proud parent showing this off,” Kreidberg said as she announced the results at the AAS. They also appear in the January 2nd issue of Nature. 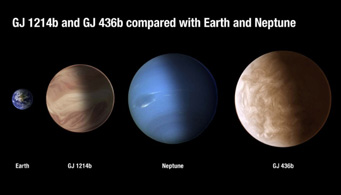 Hubble observed the system in a wavelength band (between 1 and 2 microns) that ought to have shown hints of water vapor, gaseous carbon dioxide or carbon monoxide, or methane molecules. So the team was surprised when, instead, the spectrum showed no features at all. You could say the planet flatlined.

Flatlining isn’t usually a good thing, but in this case, the null result carries a treasure trove of information. For a long time, astronomers have held two views of this particular planet’s atmosphere: either it’s cloud-free and made of heavy molecules, such as water or carbon dioxide, or high-altitude clouds or haze block our view of the atmosphere altogether. Kreidberg’s observations break the tie — they definitively show that GJ 1214b must have high-altitude clouds.

And these are no ordinary clouds. Instead of being made of water vapor, methane, or any of the ordinary cloud-forming material we see in the solar system, the clouds might be of more exotic stuff, like droplets of potassium chloride (a form of potash which, interestingly enough, is pink in liquid form, Kreidberg says) or zinc sulfide. Confirming these cloud models will be difficult with current instruments, but the infrared James Webb Space Telescope, due to launch in October 2018, could unlock the clouds’ secrets.

Watch Kreidberg explain her research here (the good stuff starts at 1:00 after a brief introduction):