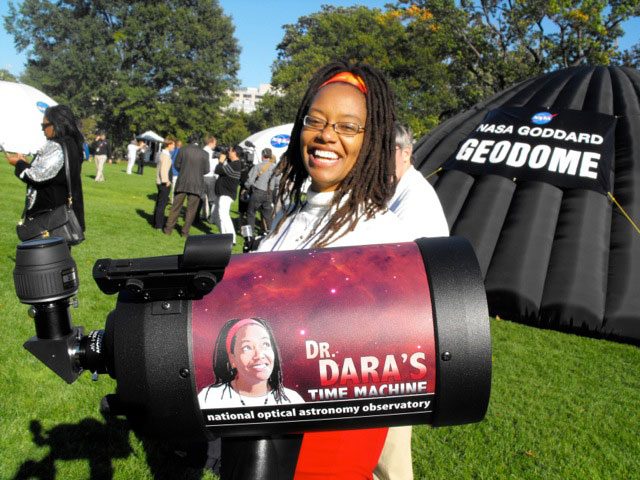 After delving into the nature of quasars, Dara Norman now paves the way for astronomers to do the work they love.

When Dara Norman was young, she often arrived late to school on the days of space shuttle launches. She watched them together with her mother, who loved space exploration.

Those mornings were among the early experiences that led Norman to become an astronomer at the National Science Foundation's NOIRLab in Tucson, Arizona. “I'm doing what my mother wanted to do,” Norman says with an easy laugh.

From Chicago to MIT

Norman spent her formative years in Chicago, after moving from Maine at age seven. At first, her family lived on the predominantly Black South Side. But at their mother's insistence, they moved to the more affluent Kenwood neighborhood, where Norman and her younger sister attended the more racially diverse public school Kenwood Academy.

The Windy City provided Norman access to world-class museums. The Norman sisters sometimes rode a free bus to the then-free Museum of Science and Industry or the Adler Planetarium. “To this day, I absolutely love hanging out in museums,” Norman says.

Norman wanted to be an astronaut, but poor eyesight derailed those plans and her interests led her instead to science. She enrolled in a STEM program at the Carnegie Mellon University in Pittsburgh the summer after her junior year of high school, though her mother had to take out a loan to pay for the program's $1,000 enrollment fee. The course provided a preview into Norman's future: There was only one other Black person. But she did well there, and the positive experience buoyed Norman's confidence.

The Cambridge, Massachusetts, school fit that bill, as well as her desire to leave the Midwest but not be too far away from family in southern New Jersey. At her mother's insistence, she attended a prepaid, freshmen orientation program called Interphase. The orientation provided her with a cohort of students with a shared experience. “I can't even imagine how disorienting it might have been to not have that and arrive at MIT,” Norman said.

Freshman year at MIT went well, even advanced physics. But by sophomore year, Norman crashed. She took a slew of difficult classes that year and rowed crew, too. That whole semester Norman experienced anxiety, and by the fall of her junior year she was on academic probation. Because of that, she was restricted to taking four classes, one of which was an observing class in Earth Atmosphere and Planetary Science. Jim Elliot, the astronomer who discovered rings around Uranus, led the class and mentored Norman. Looking back, she realizes she hadn’t received proper — if any — mentoring until then. “I probably would not have stayed at MIT if I had not met Jim,” she says.

And from Jupiter to Quasars

Elliot also provided Norman with something else: a vision into her future. In his class, she looked into a telescope for the first time, seeing Jupiter. “It looked like all the pictures in the book!” she says, as she recalls her excitement. “There was a spot on it and there were stripes!”

Norman went on to graduate school at the University of Washington, where she remembered the benefit of having a cohort. She adopted the same strategy in Seattle, with two groups this time: her class of astronomy doctoral candidates as well as a group of Black women graduate students in various programs.

As a graduate student, she looked farther afield — at quasars. Quasars are a type of active galactic nuclei (AGN), the bright centers of galaxies. The light we see from AGN comes from swirling disks of material heating up as it falls into the black hole. That small, central region can shine as brightly as the rest of the stars in the galaxy.

For her dissertation, Norman studied correlations between quasars and the stuff in front of them. “My interest was in how we might be fooled about our understanding of the background quasars,” she says. “I wanted to understand how our view of the distance universe might be biased because we have to look through the universe to understand it.”

Astronomers tend to see quasars in back of a foreground galaxy or galaxy cluster. And while quasars are bright, astronomers also only see them because they are bright. The mass in foreground galaxies can act like eyeglasses, magnifying the quasar's image in what astronomers term gravitational lensing. Norman was curious if — among all the bright quasars out there — more of them might be lensed than we realize.

Norman used the old, wide-field 24-inch Burrell-Schmidt Telescope at Arizona's Kitt Peak National Observatory to take more than 100 images of quasars. Then, as she says in her self-deprecating way, “I counted dots.” In other words, she tallied the galaxies around each lensed quasar, and she found that bright quasars tend to have more bright galaxies in front of them. Though small, the effect of unknown gravitational lensing is statistically significant.

“All of what we know about the universe is built on a ladder of discoveries,” Norman says. “We need to always double-check the lower rungs as we go, to make sure there is no newly discovered effect that can ripple through.”

Now Norman continues to research the nature and environments of galaxies that host AGN. But as NOIRLab's Deputy Director for the Community Science and Data Center, her work mostly involves supervision, administration, and facilitating access to data and research resources for the greater astronomy community. Research can be a hard slog with a small, critical audience, Norman says. She finds refuge in mentoring, with more immediate satisfaction and a wider, more appreciative audience. “I couldn't do any science if I wasn't doing this work.”

Giving back to the community is, and has been, a huge part of Norman's life and career. After graduating from MIT, she did public outreach with the Hubble Space Telescope mission at NASA’s Goddard Space Flight Center in Maryland. Later, at the University of Washington, she took requests for science communicators from the Seattle community, including a Muslim school for young girls, a high school for at-risk kids, and a jazz band playing Sun Ra’s music who wanted to include astronomy in their performance.

“Enabling other people to do their science is really satisfying,” Norman says. “It's also where I feel I can make a difference.” She doesn't want astronomers of color to be disregarded or passed over for work as she sometimes was.

Removing the conceit that there's anything innately special about astronomers — and that anyone with the interest and drive can excel in the field — she reasons there should be a proportional number of astronomers of color. Without this vital demographic, Norman knows we're missing a pool of knowledge, perspective, creativity, and understanding, which changes the kinds of questions asked.

“As African Americans, we've seen the world work in a way other people have not seen.”