Brad was the Vice President of Planetary Occultations Services for the International Occultation Timing Association (IOTA), as well as the North American Coordinator for observations. From late 2006 through September 2018, Brad analyzed North American observations of asteroids occulting background stars, producing plots that revealed asteroids’ shapes and even an asteroidal moon. He also provided Sky & Telescope calculations for upcoming occultations, so that events could be published in the magazine.

A prolific observer and author, Brad was involved in a total of 60 academic articles, 26 of them published in refereed journals. Among these was the announcement of the discovery of a probable satellite to the Trojan asteroid Agamemnon.

Brad was born on February 24, 1950, in Geneva, New York. One of his greatest passions in life was astronomy, starting at a young age. All young Brad wanted for Christmas was a telescope, which his parents wisely gave him, and that telescope would play a large part in his life.

His love for astronomy as well as meteorology led him into a career teaching high school science. Known as Mr. Science to his students, he taught at the Newark Central School District in New York for more than 30 years. In addition to teaching earth science, physics, astronomy, and meteorology, Brad also served as the chairperson of the science department and spearheaded countless science projects that harnessed the imaginations of the students and staff. Many students visited his home observatory to look at the Moon, planets, and stars.

Brad was an active weather spotter for several local news stations and kept records of the weather at his home for many years. He also measured earthquakes with his in-home seismometer. In retirement, he continued to contribute to the scientific community via amateur astronomy, astrophotography, and weather-spotting.

Brad served for 12 years as the North American Regional Coordinator for IOTA. In 2017, Brad was recognized with the Homer F. DaBoll Award from IOTA in recognition for his outstanding service. 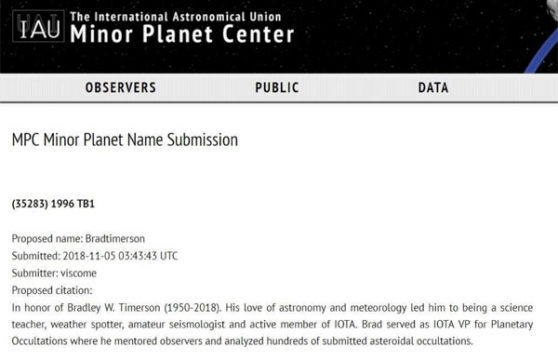 Brad is survived by his wife of 46 years, Cindy Timerson, his children, and his grandchildren.

Tony: Very good job in telling the story of a fine astronomer and teacher. I have had the privilege of working with you and Brad along with many other astronomers in pushing back the boundaries of ignorance over the past several decades since the Space Race of the 1960s. I have voiced my concern a number of times that I see too many people who have pushed the boundaries passing away and not being replaced as they once were decades ago. I remember S&T along with Astronomy magazines having been part with this effort. We all need to pull together if we are going to continue to help provide amateurs and educators with the tools to help provide us with a new generation of astronomers who can continue this task of assisting the astronomical community among the nations with those to be Citizen Scientist. Few know the stories of how many times Citizen Scientist have stepped into the breach to assist one of the High Priced science missions come to a successful finish and Brad was one of these heroes along with a number of others well known to you!

I worked with Brad on a couple of asteroid papers, including one on 16 Psyche that generated the shape model being used by the Psyche mission team. He was a great colleague and his contributions were invaluable. He will be missed.