There's a vastness to West Texas that maps just can't convey. You can travel the region's Sun-bleached roads for hours and not encounter a single Starbucks or Whataburger. This remoteness, coupled with abundant clear, dry night skies, long ago drew astronomers from the University of Texas to the town of Fort Davis and especially to the commanding view from atop nearby Mount Locke, 6,790 feet (2,070 m) above sea level. 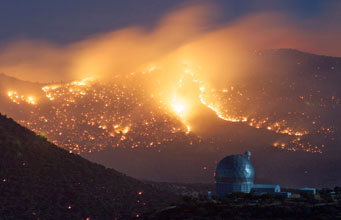 With the dome of McDonald Observatory's Hobby-Eberly Telescope at lower right, this view taken on April 17, 2011, shows fire raging on nearby Black Mountain. The bright lines to the dome's upper left are the advancing Rock House Fire (at right) and a control burn (at left) set by firefighters. Click here for a larger version.

But for the past two weeks, McDonald Observatory's mountaintop perch has been under siege, as a catastrophic inferno dubbed the Rock House Fire has decimated more than 300 square miles of the surrounding countryside. Dozens of homes and businesses have been destroyed in Fort Davis, which is about 10 miles to the observatory's southeast.

Last week, when the fire had crept to within about a mile of Mount Locke, firefighters used a control burn on a nearby peak to consume tinder-dry vegetation that would otherwise have provided the raging flames with a pathway to the observatory. Most of McDonald's 80-person staff and their families evacuated. One of the few who stayed was senior program coordinator Frank Cianciolo, who took the dramatic image seen here and several others.

The National Forest Service reports that the fire is now 75% contained and, fortunately, the observatory is out of danger. Its visitor center reopened on Wednesday. Also in the clear is the historic Prude Ranch, which will host the 32nd annual Texas Stary Party from May 29th to June 5th. No fires have been reported on the sprawling ranch, and in fact no burned land is visible in any direction from meeting site. "Of course, with the continued dry conditions this may change," notes TSP staffer Dave Clark. "But
burned areas tend not to reburn so we may be relatively safe from any new large wildfire."

The Rock House Fire brought back vivid memories of another major conflagration in 2009 that threatened — but ultimately spared — Mount Wilson Observatory. However, historic Mount Stromlo Observatory wasn't as fortunate: in 2003 a ferocious brushfire overran the compound near Canberra, Australia, and destroyed six of its telescopes.

Thank goodness that McDonald Observatory was spared! In addition to the cutting-edge research being done every day at this excellent facility, it educates thousands of students each year and is by far the most visitor-friendly observatory I've been to. If you haven't visited McDonald Observatory or the quintessential West Texas town of Fort Davis, perhaps this near miss by the fire will make you aware of this national treasure.

This is a non-article.

If the observatory burned down, it would be a story.

Stop trying to be sensational.

It makes you look even more unprofessional.

The enormous Hobby-Eberly Telescope is one of the world's largest instruments - and one of the CHEAPEST! It does not track objects, rather it scans the sky, using the Earth as a telescope mount. The spectroscope follows the image; holes are drilled into a plate and fiber optics pick up the image and send it to the spectroscope. It's cheap and easy to make the plate follow the image. Kind of tought to drill all those precision holes to match the positions of stars on the image, and you need lots of those plates, but the University of Texas managed a world-class instrument on a tiny budget. What a triumph of clever design!

My buddy Marshall sitting next to me wants to know if it was arson. The Mount Wilson fire was arson. They caught the guy. I don't know what happened to him, but two firefighters died in that. Very little makes cops and judges angrier than the murder of a fireman.